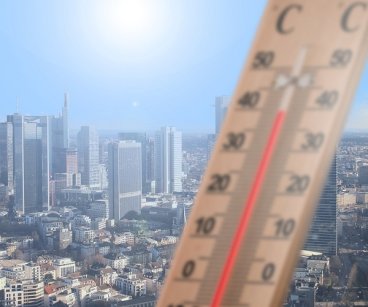 While it has long been a given that global populations have been migrating to cities, and more recently that climate change is increasing average temperatures, weather scientists are now putting the two trends together to raise concerns about the increase in urban heat-related illnesses and deaths.

What have been called “urban heat islands” occur when the growth of cities replaces natural land cover with dense concentrations of pavement, buildings, and other surfaces that absorb and retain heat. This effect increases energy costs (e.g., for air conditioning), air pollution levels, and heat-related illness and mortality.

The built environment of roads, buildings, and centralized infrastructure (especially concrete and asphalt) absorbs solar energy and radiates it around the clock. In a public health context, this pattern is complicated by the difficulty in correctly diagnosing for heat-illness and related deaths, as heat can contribute to and amplify existing negative health conditions.

Another complicating factor is the wide range of variance of “hot spots” across any large city. Factors involved include variances between upper- and lower-income neighborhoods, with structures in richer areas more likely to have mitigating technologies such as effective insulation and air conditioning. As well, vegetation such as tree plantings and parks have a substantial cooling effect by releasing water vapor during photosynthesis.

In addition, tall buildings block cooling air circulation, and their building materials (brick, wood. etc.) each store and release heat differently. In climate science, air temperature is typically measured in the shade, while being in the open sun can have a dramatically greater impact on the human body. In fact, a measurement technology called RealFeel has been developed that incorporates factors such as cloud cover, sun angle, and humidity (and the latter is the most critical in human response to heat, both in terms of personal perception and actual health impact).

Edith de Guzman of the Los Angeles Cooling Collaborative says that the young and the elderly are most at risk in extreme heat events (which are becoming more common each year) because their bodies have less effective thermo-regulation. Also, conditions such as asthma increase the danger from heat domes such as the one that occurred in the northwestern U.S. from late June until mid-July in 2021.

Vivek Shandas, a climate adaptation scientist at Portland State University in Oregon, found that, during that dramatic event, air-conditioned homes were kept at 75 degrees F. while temperatures in homes without soared to as much as 125 degrees. He also found that, in many cities, low-income urban areas had less investment in green spaces and more occurrence of freeways and heat-absorbing infrastructure.

Although climate scientists are still challenged in accurately modeling variations in micro-climates within cities and among cities in the U.S. and globally, some overarching strategies seem to have promise. However, the overall view is negative. According to Dr. Kristie Ebi at the University of Washington Center for Health and the Global Environment in Seattle, “It is definitive that we are already seeing an increase in the frequency, intensity and duration of heat waves. The projections are that this escalation will continue across the U.S.” And the cooling industry is adding to the problem. It accounts for 10% of global CO2 emissions, and air conditioning’s demand on electric power plants is projected to triple by 2050.

De Guzman suggests that in these changing times, heat management should be seen as a public health issue, which might be approached with better methods of recognizing heat cramps, heat exhaustion, and heat stroke. As well, increasing tree plantings and painting roofs lighter colors would assist urban areas in managing the problem. Greater understanding of urban heat island effects and impact can offer positive responses to a world that is not getting any cooler for the near and perhaps far future.

For example, it is estimated that the 2021 northwestern heat dome—which would previously have been a “1,000 year” severe weather event—was made 150 more times more likely by climate change, resulting in the highest temperature ever measured in Canada (120 degrees F). NOAA estimated that heat dome related damages ran to $9 billion, including flooding from snowmelt, rail and road infrastructure meltdown, extensive crop loss, and wildfires (one completely destroying the Canadian town of Lytton, British Columbia—the site of the above heat record). The New York Times estimated at least 600 deaths can be directly linked to heat in Canada alone—in both urban and rural areas—and over 1,000 region-wide. In addition, over 3,000 emergency medical team calls were directly tied to extreme heat in the Pacific Northwest over that three-week period.

These above examples provide weight to the conclusion that, while urban heat sinks are likely to worsen, climate change and extreme weather will add to their severity. But the question remains—as has been true of climate change generally—is whether viable response strategies will be developed and then implemented effectively worldwide.

About the Author
Timothy C. Mack is managing principal of AAI Foresight Inc. and former president of the World Future Society (2004–14). Contact him at tcmack333@gmail.com.

Image by Gerd Altmann from Pixabay