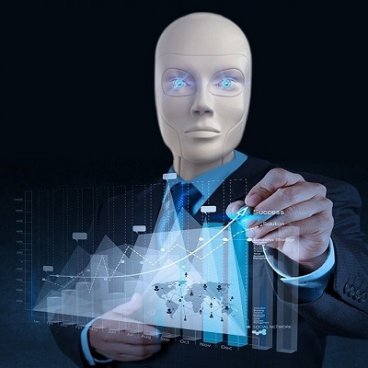 The idea of an animated talking head on a screen giving your annual review may sound fanciful, but AIs (of a sort) have been making headway in the worker oversight arena for a number of years. MetLife customer service representatives have been getting an ongoing review in real time in their screen corner with icons prompting them to “slow down speech,” “increase empathy,” and “up energy levels” (with a coffee cup) developed by Cogito. In Silicon Valley, the company Percolata has been offering in-store sensor systems for retail companies like 7-Eleven (formerly Southland Corporation) that gauge productivity for each employee in stores where it is installed and then order-ranks them.

The outsourcing of payroll, employee scheduling, and even performance reviews is no longer new (especially for middle management), but the move to real-time oversight for what are termed “9-to-5” jobs is still getting pushback from employees—such as for door delivery services that monitor when employees are given tips and automatically add them into wage totals. In response, employers have pointed out that customer thank-you’s, empathy for claimants, and general slacking are within their realm of oversight responsibility.

But shifting responsibility for hiring over to AIs (such as scanning résumés for keywords) is still an area of contention, except where innovative approaches from companies like Pymetrics, which offers a game-based tool that directly tests an applicant’s job skills (versus accepting skills claimed on a résumé), actually improves the process. Eliminating human bias makes sense, but the move to almost constant vigilance and analysis has not always been well received.

This is to be expected when one takes a look at how “efficiency expert” AIs can perceive patterns that no human supervisor could: How many seconds between contacts in a call center? How long at the coffee machine? Could a different delivery route shave off a minute or two, with one more package a day delivered? One analyst noted that, “as these little breaks and minor freedoms get optimized out, the jobs are becoming more intense, stressful, and dangerous.” International worker surveys reveal less traditional anxiety about whether robots will replace them but more anxiety about what kind of boss the new AI manager will be.

Similar changes are occurring throughout the retail industry. For instance, retail workers no longer stand around in stores waiting for customers. With e-commerce, their roles are split: Some work in warehouses, where they fulfill orders nonstop, and others work in call centers, where they answer question after question. In both spaces, workers are subject to intense surveillance. Their every action is tracked by warehouse scanners and call center computers, which provide the data for the automated systems that keep them working at maximum capacity.

In call centers, management apps can allow as little as 30 minutes total per month for bathroom breaks and personal time, while handling calls from people dealing with terminal illnesses, dying relatives, miscarriages, and other traumatic events are supposed to be completed in averages of less than 12 minutes, for 10 hours a day.

In some programming jobs, workers are expected to make at least 150 keystrokes every 10 minutes, so if one paused to think and stopped typing, a 10-minute chunk of his or her time card would be marked “idle.” Each week, if a programmer didn’t work 40 hours that the program deemed productive, he or she could be fired, so a common practice has developed of working an extra 10 hours as a safety net.

Like the efficiency experts of the 1950s, AI time/quality management is sweeping corporate America. Without looking at the customer experience or the health and morale of the workers, it makes perfect sense: The numbers show productivity equals profits and profits equal (usually) stock value. However, the wonderful thing about Western democracies is political pushback, which appears to be gathering steam, with Amazon as a focus.

At Amazon warehouses, almost every aspect of management is directed by software, from how fast people work to whether they get fired for falling behind. Every worker has a “rate,” a certain number of items they have to process per hour, and if they fail to meet it, they can in fact be automatically fired with no appeal. In one Florida warehouse, three human managers managed a workforce of more than 300, using negative AI reporting to personally encourage workers to work faster.

“It’s like leaving your house and just running and not stopping for 10 straight hours, just running,” one worker said. Backaches, knee pain, and other symptoms of constant strain are common enough for Amazon to install painkiller vending machines in its warehouses. Workers often burn out, but because each task is minutely dictated by machine, they are easily replaced. One worker who quit a Staten Island Amazon warehouse to take a job loading and unloading delivery trucks still had to deal with scanners and metrics, but those only measured whether his team was on track for the day, leaving the workers to figure out their roles and pace for themselves. As he told his co-workers, “This is like heaven.”

Perhaps this would not have drawn as much attention without the issue of unions entering the scene. Unions have a long-term history of channeling worker dissatisfaction, and the AI issue is certainly generating a significant amount of it. Contributing to that is the automation of Amazon warehouses with shelving robots, which work faster than humans and thus require maximizing the humans’ physical speed to keep pace. A range of unions have taken runs at organizing various Amazon locations, and the company response has been quite aggressive, from suggesting that voting in favor of unionization was grounds for firing to calling union organizers “a cancer within the organization.”

While these tough tactics have been successful to date, the future of union focus on AI management is still foggy, but likely to be a highly combative one.

Timothy C. Mack is managing principal of AAI Foresight Inc. and former president of the World Future Society (2004–14). He may be reached at tcmack333@gmail.com.

Image by sujin soman from Pixabay