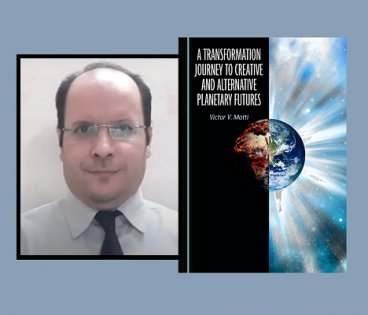 Victor V. Motti “fell” into future studies from an initial intention to pursue a career in engineering, he tells readers at the opening of A Transformation Journey to Creative and Alternative Planetary Futures. Motti is now an international writer, speaker, foresight adviser and, since 2017, the director of the World Futures Studies Federation.

His is a compelling story, especially for someone like myself, who started out as an attorney and ended up president of the World Future Society. In my own mind, the transformative nature of foresight is almost irresistible, as the field appears to relate to almost every other area of study. Accordingly, this book’s expansive title accurately describes futures as an area of lifelong study.

Motti’s encounter with the writings of leading pioneers in the futures field continued to nudge him away from engineering, as he discovered the cross-disciplinary relevances and possibilities available to a foresight student and to the practitioner. As Dr. Tom Lombardo observes in his preface to this book, the story of the author’s journey is one of infectious curiosity and imagination, augmented by an ongoing series of meetings with organizations and individuals who “helped him along his way.” I am especially sympathetic with Motti’s move from the sciences into the humanities and with his growing interest in binary approaches to the “way the world works.”

One appealing aspect of the book is its author’s willingness to explore the concept of futures in other cultures (and languages besides English) as an active step toward making the “planetary” element of the title meaningful. The range of Middle Eastern and other attitudes are quite interesting and add value to the discussions.

Another quite energizing area of discussion is how the cross-disciplinary nature of the future is actually playing out, such as in the converging technologies usually defined as nanotech, biotech, infotech, and cognitive technology (NBIC). As futurist Paul Saffo has recently noted, the most disruptive innovations involve not a single new technology but a half dozen of them colliding at the same time in the same arena.1 One example is the rapidly expanding area of nootropics, where drugs, supplements, and nutraceuticals are being developed to improve cognition, memory, intelligence, motivation, attention, and concentration. The book offers fascinating insights on how these technologies will change the nature of being human.

This is especially interesting in the context of how to reduce violence in humans and the frictions between cultures, with the goal of moving toward a planetary outlook. Motti does a thorough, systemic analysis of the factors involved and how to better understand them, which could prove useful when examining the often unrecognized cultural gulfs between East and West and their impact on planetary dynamics. But the discussion goes far beyond the binary cliché of Eastern interdependence versus Western independence and examines how these gulfs could be better identified and addressed.

One very promising arena Motti addresses is the expansion of artificial intelligence and virtual reality. including their impacts on education and communications and on human cognition and capabilities. This is especially relevant in light of the human brain’s neuroplasticity and its ability to rewire itself in response to new challenges (and opportunities).

Finally, Motti addresses the shifting of gender roles, an area of foresight that does not get enough attention. He examines the relatively greater robustness of female immune systems and gender variations of neural wiring, leading to varied strengths in areas of cognition. This then yields a fascinating discussion of the future of work and culture, as the binary balances between genders shift.

The book closes with a discussion of foresight approaches to the modeling of complex systems, with a broad range of model examples. This is a strength evident throughout the book, where sections addressing foresight projects under discussion are often illuminated with charts and the relevant formulas used in their calculations. All in all, this is a very strong and informative book.