Older workers are a burden and a salvation for the economic future. We are all aware that the graying populations in developed countries now, followed by developing countries, are a demographic force whose impacts will be felt over the next 50 years. 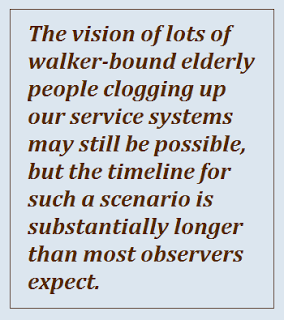 Still, even such clear demographic forces are subject to influence from other forces, rendering the future uncertain. These forces include new technologies (health and genetic manipulation), education (resulting in fewer births among women, more time working), and cultural values (retirement bores many people). So the vision of lots of walker-bound elderly people clogging up our service systems and soaking up our tax money (or starving in the streets) may still be a possible and maybe even probable future (though not preferable)—but the timeline for such a scenario is substantially longer than most observers expect.

The U.S. Census Bureau still insists that one in five Americans will be 65 or older by 2040. That is the certain part. But what that will mean for the United States (still a bellwether nation) and the rest of the world is getting a lot more complex. The projected 67 percent increase in that over-65 U.S. population between 2015 and 2040 is very likely to include plenty of older individuals still working, still healthy, and still productive. The Urban Institute estimates that, by 2019, 35 percent of the labor force will be over age 50; Sloan Center on Aging & Work at Boston College says 25 percent of workers will be over 55.

Part of this shift is due to health and workplace technology (telecommuting and the DIY workforce), but part of it is cultural. The now-retiring boomers are easily bored and hungry for mental engagement; and they are largely broke, with poor savings habits and the related need to continue eating regularly. As well, older workers are increasingly willing to forgo benefits (Medicare) by working part time in semi-retirement. While many employers are slower than their workers are to accept these attitude shifts, expect this shift to increase. In the face of a projected shortfall of trained younger workers as the economy continues to recover between now and 2030 (expect low U.S. unemployment levels for several decades), employers will increasingly value more experienced and skilled workers.

That said, skill sets also will shift rapidly, and our older, experienced workers will need training. Employers have shown a significant aversion to paying out in a globally competitive environment. Accordingly, low-cost training options such as community colleges, tax incentives, and other strategies appear viable for funding these programs, although the 21st-century skills that will be needed have been evolving over the past decade and a half.

Another important consideration for workers who will continue to commute to a traditional workplace are such adjustments as ergonomic chairs, better lighting, and exercise programs for all workers, including older ones. And it is likely that a constricting labor market will expand the number of companies who are thinking in this manner.