The beginning of a New Year was greeted with the usual popular media attention to “the future,” which means collections of ongoing and imminent trends disguised as click-attracting predictions. For futurists and other foresight professionals, it is an opportunity to capture the imaginations of those otherwise preoccupied by the present, even as we remind ourselves of our true purpose.

The usual futuristic subjects—artificial intelligence, virtual reality, and robotics—appeared in some lists, but a few twists on these topics caught our eye: In Ireland, a Future of Law and Legal Tech Conference warned that lawyers could go extinct if they don’t reduce their fees and streamline their practices. “Eight out of ten U.S. law firms believe that robots will take over most low level and data- driven procedures within 10 years,” reports the Independent.

Writing on LinkedIn Pulse, Singapore futurist Harish Shah had a slightly different take on the annual predictions exercise: He offered a list of technologies that will be obsolete by 2030, including physical monitors, which will be replaced with holographic displays, and nearly all forms of computer we now rely on—PCs, laptops, tablets, and smartphones—which will be replaced by wearables.

Comment: I find the latter forecast a bit disconcerting, as I attempt to execute this newsletter on a five-year-old (no longer manufacturer-supported) laptop with a dead battery. Though I’ve achieved the paperless future, I’m not yet ready for the holographic one. —CGW

“Obsolete By 2030: A List of Tech Items We Cannot Imagine Life Without Today” by Harish Shah, LinkedIn Pulse (January 6, 2016).

The Information Technology and Innovation Foundation’s second annual Luddite of the Year Award is still taking nominations. The “honor,” ITIF says, “recognizes the year’s most egregious example of a government, organization, or individual stymieing the progress of technological innovation.”

Topping the not-in-any-particular-order list of nominees for 2015 are the duo “alarmists” Elon Musk and Stephen Hawking, nominated for their endorsement of last year’s open letter to their scientific peers warning of the danger of creating an artificial intelligence. (See the story in the April 2015 Foresight Signals.)

Comment: While we certainly admire ITIF’s work to encourage innovation, shaming respected scientific leaders for encouraging others to consider the potential negative consequences of their work strikes us as counter to the mission of foresight generally and technology assessment specifically. The real Luddite awards should be reserved for those who attempt to ban the research they fear,* which Musk and Hawking did not do; they asked for broader research, not no research. —CGW

*For example, see the North Carolina legislature’s 2012 ban of research on climate change.

The English-language version of Elina and Kari Hiltunen’s Technolife 2035: How Will Technology Change Our Future? has now been published by Cambridge Scholars Publishing.

In addition to providing a comprehensive overview of technology forecasting methodologies, the authors offer an insightful vision of where technologies may lead us into the future. The text concludes with three extended scenarios based on a reimagining of the Romeo and Juliet story, first presented in The Futurist magazine (July-August 2014).

In their preface, the authors invite readers to put the book away and leave it in a drawer for another 20 years, the open it again for a “burst of laughter” at how “silly were they back then.” For we no doubt will all predict a few silly things and miss quite obvious ones, the authors admit. But prediction, they point out, is not the point, but rather raising “discussion about what technology can bring with it—both the good and bad.”

The December 2015 issue of the Journal of Futures Studies, co-edited by Thomas Lombardo and Jose Ramos, focused on the relationship between science fiction and foresight. In the lead article “Science Fiction: The Evolutionary Mythology of the Future,” Lombardo writes that those science fiction works that deal with the future may be viewed as narratives of tomorrow's possibilities.

“A good story about a possible future, with its drama, action, and sensory detail, is psychologically more compelling and realistic than an abstract theory, static image, depersonalized futurist scenario, or statistical prediction,” Lombardo writes. “Science fiction personally draws us into a rich vicarious experience of the future through its vivid and memorable characters. We live the story through the characters. All told, through science fiction narrative, we live and feel the future at a deep and intimate level.”

On the Move: Brian David Johnson

Longtime Intel futurist Brian David Johnson has joined the faculty of Arizona State University as a “professor of practice” in the School for the Future of Innovation in Society and futurist in residence for the spring 2016 term. At ASU Johnson will lead two major projects: The Future of the American Dream and the 21st Century Robot.

“I’m so excited about the future and what we’ll be able to accomplish,” Johnson said. “ASU is one of the world’s most innovative and forward-looking institutions. It’s the perfect place to collaborate with a broad, diverse set of people and to explore the future in exciting, intellectually rigorous and surprising ways.”

In AAI Foresight's latest Foresight Report, “Digital Citizenship,” futurist consultant Karl Albrecht describes many advantages of a national digital ID system, including what might be the “killer app”——immigration reform. The digital citizenship program he describes would tackle at least one fundamental issue: determining who is a citizen and who is a “guest.” What to do with guests determined to be where they shouldn't be has yet to be resolved. 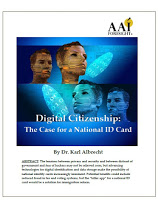 Albrecht observes that the technical obstacles to creating a connected but secure and anonymous database system to establish national identity are not as daunting as are the political and social obstacles. Fears of government overreach match fears of hacking and terrorism, and as long as the supporters match the opponents of a national ID system, a satisfactory system is unlikely to come about soon.

In case you missed it: In his end-of-year report, Tim Mack reviews the activities and accomplishments of the first full year of operations for AAI Foresight Inc. In addition to a number of internal and external publishing projects, Mack participated in a new science-focused series, SciTech Voyager TV series for Turkish Radio Television. See AAI Foresight Year-End Report, Foresight Signals (December 2015).

What is new this time with machines replacing humans is that … we are now producing a second intelligent species. The unanticipated huge and evolving success of the combination of deep learning, big data, and fast machines is producing greatly improved machine intelligence via soft computing long before brain emulation is slated to do so. Therefore, the machines taking the jobs, including the creative jobs, is now being accelerated.

Much of [Mack’s] piece is nearer term, as humans try to fight desperately to hang onto traditional thinking and functions. It is all going to have to be wholly reinvented, [as I discussed in] “Creating Problems and Enabling Solutions” (Foresight Report, Summer 2015). “We reinvented humans … twice before: the agricultural age and the industrial age. In each there was a major change in what humans did and [in] their social fabric. This new “Machine Revolution” [will] have essentially all of the human capabilities for economic activities, including creativity, only far greater and far more than humans. If anything this is even more of a sea change to the human existence theorem than the Agricultural and Industrial [revolutions].

Humans have simply been too successful and have invented themselves out of their jobs. Humans 3.0 is now “our” horizon. Much of what you cover in this present piece is rapidly being transcended.