Hot Topic: The End of Coal?

About a dozen years ago, energy policy analyst Barbara Freese warned in her groundbreaking book, Coal: A Human History, that our use of coal would one day be condemned by future generations and that all of coal’s contributions to the industrial development we’ve come to enjoy and take for granted would be overshadowed by the predicted drastic climate changes.

While responses to Freese’s recommendation that “we move quickly and aggressively toward climate-friendly energy sources” have arguably been neither quick nor aggressive, signs of the end of our dependence on coal (and our vulnerability to its unhealthy impacts) are emerging.

Recent data from the Institute for Energy Economics and Financial Analysis show that China’s slowing economy and its move away from heavy industry toward services are dragging down demand for coal; both domestic coal production and imports have declined, and the government has announced it “will not approve any new coal mine projects for the next three years and will close down a thousand small mines,” reports Tim Buckley, IEEFA’s director of energy finance studies, Australasia. As a result, “China’s total country emissions are on track to peak potentially a decade earlier than their official target of no later than 2030.” Meanwhile, China is ramping up its investments in wind, solar, hydro, and nuclear production.

In the United States, where renewable and efficient energy investment is about half that of China ($56 billion in 2015 versus China’s $110 billion), coal is nevertheless on a downward trend, with “a 10 percent year-over-year decline in coal consumption in 2015 (and down already a staggering 29.7 percent so far in 2016) in addition to a three-year moratorium of new federal coal leases,” Buckley reports.

As one sign of the times, utilities in Oregon have agreed to phase out coal-fired plants by 2030 and to double the amount of renewable energy they generate by 2040. The measures are popular with Oregon voters—and have united some seemingly unlikely partners, Pacific Power spokesman Scott Bolton told Oregon Public Broadcasting. “Some of these folks we’ve never worked with before, so it is actually exciting to find some common interests,” he said. “You don’t see PacifiCorp and Sierra Club on the same letterhead very often.”

Futurists in the News: Alex Steffen

“Planetary futurist” Alex Steffen, author of Worldchanging and Carbon Zero, was one of a handful of non-tech innovators in the San Francisco Bay area profiled on the blog The Bold Italic. (Also profiled for the piece were a chef, a distiller, and a singer.) The article describes Steffen’s work as “environmentalism to the core but goes beyond, requiring a complete rethinking of how humanity engages with the environment” and Steffen as the kind of innovator needed “to guide us through the hazy, tough road ahead.” Read: “Four Standout Bay Area Innovators Who Aren’t in Technology” by Ronny Kerr, The Bold Italic, January 15, 2016.

The Lifeboat Foundation published three new books of fiction and nonfiction at the end of 2015. Visions of the Future, edited by J. Daniel Batt, features stories and essays on artificial intelligence, androids, life extension, and more, including contributions from Ray Kurzweil, David Brin, and Martin Rees. Prospects for Human Survival, by theoretical physicist Willard Wells, argues that technological advances may be accelerating faster than our ability to control them, suggesting that humanity should develop friendly superhuman AI as quickly as possible. The third edition of The Human Race to the Future: What Could Happen—and What to Do by Daniel Berleant also was released. Details: Lifeboat Foundation Books. 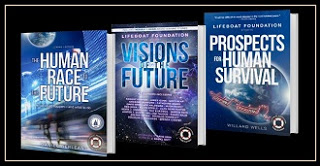 In a recent announcement to members, World Future Society board chair and Interim Executive Director Julie Friedman Steele said she would be conducting a listening tour over the next few weeks to share thoughts on the future direction of the Society. With the endorsement of founder Edward Cornish and his family, WFS will hold its 2016 annual meeting July 22-24 in Washington, D.C. The conference will take the form of a summit and celebration of the Society’s 50th anniversary. WFS headquarters are now at 1875 Connecticut Ave., N.W., 10th Floor, Washington, D.C. 20009. Download FAQs and profiles of Steele and the current WFS board of directors (PDFs).

Maurice F. Strong, secretary general of the UN Conference on Environment and Development, died November 30 at the age of 86. Perhaps best known as the organizer of the 1992 Rio Earth Summit, Strong was a longtime World Future Society board member and was on the Society’s Global Advisory Council through 2014. He shared his thoughts on “Reforming the United Nations” in the September-October 2001 issue of The Futurist.

“Maurice Strong was a unique voice at the World Future Society, with senior leadership experience in both the Canadian power industry and UN environmental programs, thus bridging the gap between public and private,” said former WFS President Timothy Mack, managing principal of AAI Foresight. “He also advised the UN on such delicate matters as the Korean Peninsula and China’s changing role in the world (living in Beijing for many years). He was consulted right up until his death as an expert on multilateralism and peaceful resolution of conflicts and enjoyed a high profile in the Rio and Rio+20 world environmental conferences. Strong was instrumental in promoting government funding and entry into international meetings for environmental NGOs for over 40 years.”

As autonomous and semiautonomous vehicles gain powers and popularity, one potential impact has received scant attention. In his latest blog for AAI Foresight, environmental futurist David N. Bengston warns that proponents need to look beyond the first-order effects of these technologies.