That Was Now, This Is Then

Young journalist ready to take on the future (circa 1988). 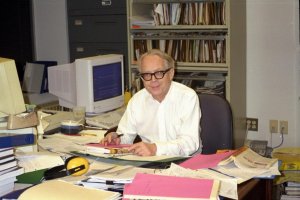 In 1999, Ed Cornish was working on his book, Futuring. When he interviewed me in 1981, that computer monitor was a manual typewriter.

That time I made the front page of the Washington Post (in red circle), with new House Speaker Newt Gingrich and futurists Heidi and Alvin Toffler. 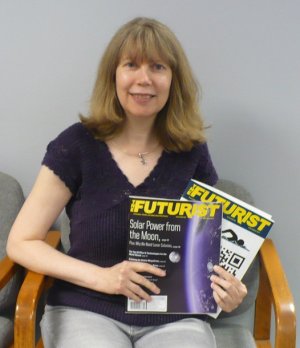 Showing off "my" magazine after Ed Cornish named me his successor as editor-in-chief, 2011 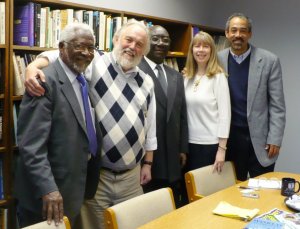 In 2011, then-WFS President Tim Mack and I welcomed a delegation from Haiti led by Raymond Joseph (far left), its former ambassador to the U.S. 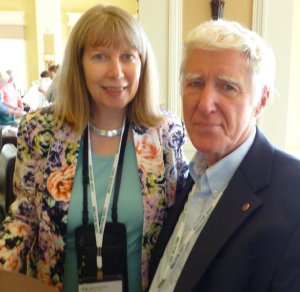 A little over 40 years ago, I brought my new master’s degree, one heavily edited published newspaper clipping, and lots of ignorance into the cluttered office of the president of the World Future Society, who was also its magazine’s editor, Ed Cornish. During a recession, I felt lucky to have an interview at all when I left Syracuse, but it seems The Futurist was looking to expand its editorial staff as the organization was heading into its 1982 General Assembly, focusing on Communications and the Future.

I don’t remember all we talked about during my three-hour job interview, but Ed seemed particularly interested in my interests. I’d hoped for a career in the arts or arts journalism, but I spoke more about philosophy and my regard for humanism and ethics. In the end, Ed said he didn’t have a lot to go on, but he had a feeling about me and hired me as an editorial assistant (I joked to my friends about my starting salary being in the six digits—counting both sides of the decimal). I stayed with The Futurist until new WFS management folded it, ending my short tenure as editor-in-chief (2011–14).

Before meeting Ed, I did at least read some copies of The Futurist I’d found at the university bookstore and a local community college library, but the only real futurist I’d ever heard of was Buckminster Fuller, who happened to be a hero of one of my college boyfriends. But oh, the futurists and thinkers and leaders I would meet!

In addition to Fuller, I got to either meet or even work with giants like Alvin and Heidi Toffler, Sir Arthur C. Clarke, Frederik Pohl, Betty Friedan, B. F. Skinner, Al Gore, and Newt Gingrich. I had a cheeky, prideful response whenever friends asked me if I’d read Alvin Toffler: “Well, just what I’ve edited.” (I was even prouder when Toffler’s consultancy once asked permission to post on its website something I’d written about the group.)

What I appreciated most about working in “the future” was the exposure to so many different topics, all of which had some bearing on the world’s future. I was “there” when Alzheimer’s disease was identified and named, when a sheep named Dolly was cloned, and when computers and communications (and the devices using them) merged to create the media ecosystem we could barely imagine during that ’82 General Assembly.

Most of us are either specialists or generalists. Some people are destined to be deep divers, becoming experts in their field or enormously adept at rare skills—neurosurgeons, commodity brokers, structural engineers, choreographers. Others are happy to skip rocks across broad oceans of knowledge, learning as much as they can about a lot of things. That’s me, a rock skipper. In college, my major should have been “English and …” or “Intro to … ” Working at The Futurist was like having a completely open curriculum, the “Future of …” everything.

Journalism and futurism both are generalist occupations (as is education), and I believe to be successful one must try to specialize within those generalist fields. A journalist might specialize in science, business, politics, or culture; a futurist might focus on advancing methodology, advising organizations, planning strategies, teaching, or writing speculative fiction.

As a journalist, I happened into the specialty of futurism. My job as an editor was to help make all of the ideas our authors and sources were writing about understandable to all readers, no matter their background. Our readers might be entrepreneurs or store clerks, high-school students or college deans, science-fiction writers or military strategists.

I advised writers and editors to write with their mothers in mind: You have to make her understand without insulting her intelligence. (In fact, both my parents were regular Futurist readers.) One of my proudest moments was receiving a letter from an adult-literacy teacher who used Futurist articles in her instruction. She said her students were thrilled to be able to read and understand important and useful things and not be “talked down to.”

Before The Futurist was closed down at the end of 2014, I had wanted to develop another e-newsletter for WFS members that focused on their own work and contributions to the field. This “community” newsletter would have expanded on the semi-regular column we ran in the magazine called Future Active.

Thankfully, Tim Mack, then the recently retired former president of the Society, invited me to use his company as a publishing platform, and so eight years ago Foresight Signals was born. Our first “issue” was an obituary for one of the most influential futurists of our time, Joe Coates. That entry remains one of the most frequently visited pages on Tim’s AAI Foresight website.

A trend I have been gratified to see emerge in the futures field is its interconnectivity, reflecting an ethic of cooperation I think would have pleased Ed Cornish and his big-tent World’s Fair of Ideas. At the same time, my ability in retirement to stay as connected with the field as I once could is fading and, I feel, becoming less necessary. I wanted to help keep the futurist community connected. You’re doing it.

For four decades the question I kept asking is “What’s next?” But the other question futurists ask, and what I ask now, is “What else?”