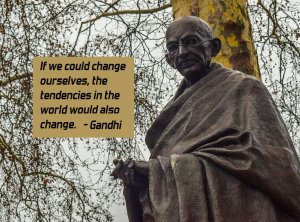 “What we do now echoes in eternity.”

“Be the change you wish to see in the world.”

The two quotations are usually attributed to two of my personal philosophical and moral guides, Marcus Aurelius (AD 121-180) and Mohandas K. Gandhi (1869-1948), respectively. But unfortunately, neither seems to have written these lines.

In the case of the echoing in eternity, Marcus Aurelius didn’t even seem to have had the relationship with eternity that would cause him to recommend thinking about one’s legacy. For example, at the end of Book Two of the Meditations he writes:

Yet, the quotation in question resonates with futurists because it reminds us to consider the consequences of our actions and their effects on future generations. The quotation perhaps originated as a line in the 2000 film Gladiator, in which the death of Marcus Aurelius sets the action in motion. It is General Maximus who inspires his men before a battle: “What we do in life echoes in eternity.”

The homily attributed to Gandhi is an idea he seemed to believe, but perhaps never wrote in such a succinct way. Gandhi’s family suggested he had said this many times. According to the Quote Investigator, “In 1913 Mohandas Gandhi published a piece about snakebites that included a thematically matching passage:

We but mirror the world. All the tendencies present in the outer world are to be found in the world of our body. If we could change ourselves, the tendencies in the world would also change. As a man changes his own nature, so does the attitude of the world change towards him. This is the divine mystery supreme. A wonderful thing it is and the source of our happiness. We need not wait to see what others do.

In publishing, we try to get our quotes right, which is why our selections of Signal Thoughts used in AAI Foresight’s newsletter include source information. Most of the quotations may be found, with their sources, in academic collections such as The International Thesaurus of Quotations, The Oxford Dictionary of Quotations, and The Quotable Woman.

But many of the selections here are simply well-expressed ideas that caught my attention in my own reading. (See “Read the Past, Write the Future.”)

“If history moves like a locomotive, in a single direction, today’s trends will become tomorrow’s reality. But if the human desire for change causes history’s course to swing back and forth like a pendulum, a reversal can be expected.”
Madeleine K. Albright, “The Coming Democratic Revival,” Foreign Affairs, November-December 2021

“All things are possible until they are proved impossible—and even the impossible may only be so, as of now.”
Pearl S. Buck, A Bridge for Passing, 1963

“The balance of nature is not a status quo; it is fluid, ever shifting, in a constant state of adjustment.”
Rachel Carson, Silent Spring, 1962

“To have his path made clear for him is the aspiration of every human being in our beclouded and tempestuous existence.”
Joseph Conrad, The Mirror of the Sea, 1906

“As for the Future, your task is not to foresee, but to enable it.”
Antoine de Saint-Éxupéry, The Wisdom of the Sands, 1948

“There is no privacy that cannot be penetrated. No secret can be kept in the civilized world. Society is a masked ball, where every one hides his real character, and reveals it by hiding. … People seem not to see that their opinion of the world is also a confession of character.”
Ralph Waldo Emerson, “Worship,” The Conduct of Life, 1860

“The man who knows when not to act | Is wise. To my mind, bravery is forethought.”
Euripides, The Suppliant Women, c. 421 B.C.

“There is little or no intellectual challenge or discipline involved in merely learning to adjust.”
Betty Friedan, The Feminine Mystique, 1963

“And so we lift our gaze, not to what stands between us, but what stands before us. We close the divide because we know to put our future first, we must first put our differences aside. … [F]or while we have our eyes on the future, history has its eyes on us.”
Amanda Gorman, from “The Hill We Climb,” recited January 20, 2021, inauguration of President Joseph Biden

“It is preposterous to suppose that the people of one generation can lay down the best and only rules of government for all who are to come after them, and under unforeseen contingencies.”
Ulysses S. Grant, The Personal Memoirs of U. S. Grant, 1885-86

“If we cannot end now our differences, at least we can help make the world safe for diversity.”
John F. Kennedy, commencement address at American University, June 10, 1963

“The future isn’t something we inherit. It is something we create.”
Richard Lamm, as quoted by Graham T.T. Molitor

“If civilization has an opposite, it is war. Of those two things, you have either one, or the other. Not both.”
Ursula K. Le Guin, The Left Hand of Darkness, 1969

“Never let the future disturb you. You will meet it, if you have to, with the same weapons of reason which today arm you against the present.”
Marcus Aurelius, Meditations, Book Seven, No. 8

“The future has waited long enough; if we do not grasp it, other hands, grasping hard and bloody, will.”
Adlai Stevenson (quoted in America Comes of Middle Age by Murray Kempton, 1963)

“It is a bad plan that admits of no modification.”
Publilius Syrus (85–43 BC)

“The future is called ‘perhaps,’ which is the only possible thing to call the future. And the important thing is not to allow that to scare you.”
Tennessee Williams, “The Past, Present, and Perhaps,” Orpheus Descending, 1957

“Rather than evidence that one is doomed, feeling lost is the necessary first stage of a fruitful quest.”
Alain de Botton and John Armstrong, Art as Therapy, 2013

“The question is whether any civilization can wage relentless war on life without destroying itself, and without losing the right to be called civilized.”
Rachel Carson, Silent Spring, 1962
[N.B. Carson was in this instance referring to the mass use of chemical insecticides in the 1950s to combat the spread of Japanese beetles. But the statement seems a universal truism. CGW]

“It is human nature to shrug off what may seem to us a vague threat of future disaster.”
Rachel Carson, Silent Spring, 1962

“We need to learn how to be different together.”
Harlan Cleveland (citing unnamed colleague at World Academy of Art and Science), “The Limits to Cultural Diversity,” The Futurist, March-April 1995

“The death close before me was terrible, but far more terrible than death was the dread of being misremembered after death.”
Charles Dickens, Great Expectations, 1861

“Troubled as the future was, it was the unknown future, and in its obscurity there was ignorant hope.”
Charles Dickens, A Tale of Two Cities, 1859

“I suspect the truth is that we are waiting, all of us, against insurmountable odds, for something extraordinary to happen to us.”
Khaled Hosseini, And the Mountains Echoed, 2013

“A period that cannot create a Leonardo expresses itself mostly in depreciation.”
Rachel Annand Taylor, Leonardo the Florentine, 1928

“We at times seem sightseers at the Tower of Babel, with groups displacing individuals in a civic life whose power games create an unending flow of manipulated words.”
A. Richard Turner, Inventing Leonardo, 1992

“The scientists, who look beyond the little menaces of the mundane moment, are, quite naturally, cheerful.”
James Thurber, “Footnote on the Future,” New Yorker, June 15, 1940

Selections from anthologies of quotations

“The liberty of others extends mine to infinity.”
Anonymous (1968 graffito during French student revolt)

“A wise man will make more opportunities than he finds.”
Francis Bacon, “Of Ceremonies and Respects,” Essays, 1625

“To state the facts frankly is not to despair for the future nor indict the past.”
John F. Kennedy, State of the Union Message, January 29, 1961

“We should not let our fears hold us back from pursuing our hopes.”
John F. Kennedy, address, December 11, 1959

“Never give out while there is hope, but hope not beyond reason, for that shows more desire than judgment.”
William Penn, Some Fruits of Solitude, 1693

“International crises have their advantages. They frighten the weak but stir and inspire the strong.”
James Reston, Sketches in the Sand, 1967

“Man’s yesterday may ne’er be like his morrow. | Nought may endure but Mutability.”
Percey Bysshe Shelley, “Mutability,” 1816

About the Author
Cindy Wagner was an editor for The Futurist magazine for three decades and editor of Foresight Signals for AAI Foresight Inc. since 2014. Contact her at CynthiaGWagner@gmail.com.

Image by Dimitris Vetsikas from Pixabay

Edited August 15 to correct source of Shakespeare's quotation about honesty. It is from All's Well That Ends Well, not Measure for Measure. Don't trust Internet sources!