How to Become an Environmental Futurist in Only 50 Years

As it was for many futurists, science fiction was my “gateway drug” to the world of alternative futures. I was hooked by age nine or ten. We always had stacks of sci-fi lying around the house because my mother was a member of a science fiction book-of-the-month club. I devoured everything I could get my hands on. 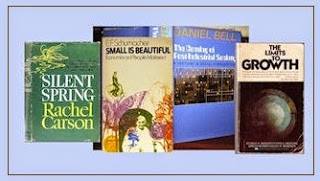 In high school, I kept up with science fiction but also started reading my father’s environmental and futures books—classics like Silent Spring, Small Is Beautiful, Limits to Growth, The Coming of Post-Industrial Society, and The Year 2000. Dad was a market researcher who was always looking for emerging trends and issues. He was also an active member of the local chapter of the nascent World Future Society in the late 1960s and early 1970s. It was through my dad’s copies of
The Futurist magazine that I first became aware of people who called themselves futurists.

After trying out a couple of college majors in the mid-1970s, I created an individually designed BS degree in futures studies. With advice and encouragement from several University of Minnesota faculty members and inspiration from Minnesota futurists Earl Joseph, Art Harkins, and Joel Barker, my program included three components:

I planned to go on in the new master’s program in Futures Studies at the University of Houston-Clear Lake.

But a funny thing happened on my way to becoming a futurist. An outstanding economics professor got me interested in the “dismal science.” I ended up pursuing a master’s in environmental economics instead of heading to Clear Lake, Texas, and eventually received a PhD in forest economics.

Forestry was fascinating, in part because of the long-term perspective: The long growing cycle of trees has compelled foresters to plan decades and even hundreds of years ahead, in contrast to the short-term view of most fields. Foresters are futurists without knowing it—they’re crypto-futurists.

After grad school, I was fortunate to land a job in the mid-1980s as an economist with the research branch of the U.S. Forest Service. This turned out to be the perfect job for me, working with talented and dedicated scientists, forestry professionals, planners and policy makers on a wide range of interesting projects. I had left futures studies behind, but over the years I often dabbled in projects on the edge of futures.

About five years ago, I was looking through some of my old futures books—never had been able to part with them—and a light bulb went off in my head: Maybe I could shift my research into environmental futures.

My project leader in Forest Service R&D was extremely supportive. She sent me to the five-day short course in strategic foresight at the University of Houston taught by Peter Bishop, rekindling my youthful aspiration to be a futurist. With strong support from the director of our research station, the first futures research group in the history of the agency was formed—the Strategic Foresight Group—with project leader Rich Birdsey and two other stellar colleagues.

In the first couple of years of this new mission, I thought of myself as a “future futurist,” not quite there yet. But after attending and presenting at the World Future Society conferences, working with several leading futurists on foresight projects, and starting to publish in futures journals, I can finally call myself an environmental futurist—after just 50 years!