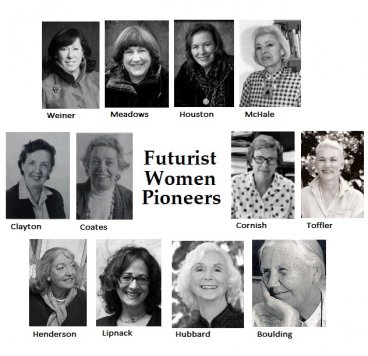 Morgan builds off Ross Dawson’s list, last updated September 2018, noting, “After centuries of decisions being made almost entirely by men, now women are stepping up to shape the future in real and concrete ways. The way we approach global challenges for the future matters, and it’s critical that women are a central part of shaping this conversation.”

Women have always been active in futures work, whether as practitioners, scholars, imagineers, or promoters of the field as a community. Admittedly, their numbers are not equal to their male counterparts, but many pioneering female futurists come to mind, starting with Mary Wollstonecraft Shelley, author of Frankenstein, or The Modern Prometheus. We could also include such influential authors as Margaret Atwood, Rachel Carson, Betty Friedan, Ursula le Guin, and Margaret Mead.

Since it is Women’s History Month, here are a dozen women—many still active—who helped establish, legitimize, and develop futurism and the tools we now use in a wide variety of pursuits—corporate, governmental, environmental, civic, scientific, academic, artistic, and much more.

Elise M. Boulding (1920-2010) was a sociologist, author, and peace researcher who advocated building a “global civic culture” to solve international conflicts. Her article “The Family as an Agent of Social Change” appeared in the October 1972 issue of The Futurist. [Learn more]

Audrey Clayton (1928-2014) served legendary scientist Alan Turing as a research assistant in 1949 and later became a senior analyst for Forecasting International Ltd. By 1982 she had become a senior evaluator for the U.S. General Accounting Office. As a volunteer with the World Future Society, she co-edited its professional journal, Futures Research Quarterly, and was active in developing WFS conference programming. Colleague Tim Mack (AAI Foresight managing principal and former WFS president) published a tribute to Audrey in the Summer 2014 issue of FRQ successor World Future Review: “Audrey Clayton: A First-Line Futurist.”

Vary T. Coates (1930- ) was a policy analyst, project director for the congressional Office of Technology Assessment, and president of the International Association of Impact Assessment (1988-89). Her papers on technology assessment, along with those of her late husband, Joseph F. Coates, are archived at Georgia Tech.

Sally Woodhull Cornish (1927-1992), journalist; co-founder and program director for the World Future Society. It’s possible there would not have been a World Future Society had not Sally vetoed her husband’s (Edward S. Cornish) impulse to move his family out of the United States during the Cold War. As a newspaper reporter, Sally brought her writing and editing skills to the organization’s publications, as well as a love of networking (before it was called that) which helped create a community of like-minded visionaries around the world.

Hazel Henderson (1933-2022)* is an evolutionary economist and founder of Ethical Markets Media, where she created the Green Transition Scoreboard. As a leader of the sustainable economy movement, Hazel produced such groundbreaking books as The Politics of the Solar Age (1981), Building a Win-Win World (1996), and Ethical Markets: Growing the Green Economy (2007).

Jean Houston (1937- ) pioneered the human potential movement and, with her husband, Robert Masters, founded the Foundation for Mind Research. Among her books are Life-Force: the Psycho-Historical Recovery of the Self (1980), A Passion for the Possible (1997), and Jump Time: Shaping Your Future In A World of Radical Change (2000). Jean continues to mentor, consult, and create programs and networks to facilitate change in communities and governments. [Learn more]

Barbara Marx Hubbard (1929-2019), considered a pioneer of “positive options” for humanity, led the Foundation for Conscious Evolution, an organization dedicated to “the awakening of the spiritual, social, and scientific potential of humanity, in harmony with nature for the highest good of all life.” Among her books were The Hunger of Eve (1976), The Evolutionary Journey (1982), and Conscious Evolution (1998). Barbara was also a founding board member of the World Future Society, to which she offered vital financial and intellectual support.

Jessica Lipnack (1947- ) is co-founder of NetAge, with husband, Jeffrey Stamps. Together they also wrote such influential works as The Age of the Network (1994) and Virtual Teams (1997). Their work has helped organizations create cross-disciplinary and cross-hierarchical teams to improve institutional learning and preparedness. In 2007, they chose to license their virtual team methodology for free to nonprofits around the world. Follow Jessica on Twitter, @jlipnack.

Magda Cordell McHale (1921-2008) was a futurist and educator, as well as an artist who (with husband, John McHale) was a founding member of Britain’s Independent Group of pop artists. In 1956 the group produced the innovative “This Is Tomorrow” exhibition at Whitechapel Art Gallery in London. It was when the McHales came to the United States and worked with Buckminster Fuller and Alvin Toffler, among others, that they helped to create the interdisciplinary field of futurism in academia. Following John’s death in 1980, Magda moved their Center for Integrative Studies to the University of Buffalo, where she worked until her retirement in 1999.

Donella H. Meadows (1941-2001), environmental scientist and systems thinker, was the lead researcher and co-author (with husband, Dennis L. Meadows, and others) of the Club of Rome’s groundbreaking report The Limits to Growth (1972). Her work continues to inspire new generations of futurists, environmentalists, systems thinkers, and activists through the Donella Meadows Project. [Learn more]

Heidi Toffler (1929-2019), writer, editor, and futures consultant, collaborated with husband, Alvin Toffler, on numerous influential books about the future, such as Future Shock (1970), often without receiving formal credit. The couple appeared together at conferences and served as members of the World Future Society’s Global Advisory Council. [Learn more]

Edie Weiner (1948- ), president and CEO of The Future Hunters (Weiner, Edrich, Brown, Inc.), was part of the team the American Council of Life Insurance put together in 1969 for its innovative Trend Analysis Program. She has since provided issues analysis and strategy for hundreds of clients in public, private, and nonprofit organizations; delivered hundreds of keynote addresses; and co-wrote (with Arnold Brown) business futures books such as Supermanaging: How to Harness Change for Organizational and Personal Success (1984) and FutureThink: How to Think Clearly in a Time of Change (2005). She received the World Future Society’s Lifetime Achievement Award in 2011.

About the Author
Cindy Wagner is consulting editor for AAI Foresight Inc. and editor of Foresight Signals. She joined the editorial staff of the World Future Society’s Futurist magazine in 1981, serving as editor in chief from 2011 to 2014. Reach her at CynthiaGWagner@gmail.com.