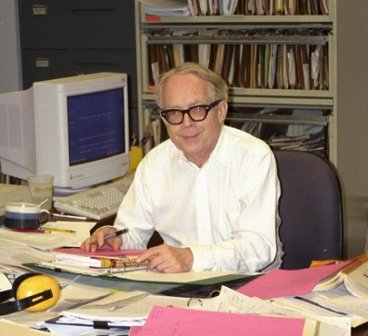 Edward Seymour Cornish, founder and first president of the World Future Society and editor of its magazine, The Futurist, died August 14, 2019. He was 91. A longtime Maryland resident (Bethesda and Rockville), Cornish had been living at Olney Assisted Living in Olney, Md., during his battle with Alzheimer’s disease.

Cornish was born in New York City August 31, 1927, the son of George Anthony Cornish, an editor of the New York Herald Tribune, and Elizabeth Furniss (McLeod) Cornish. He attended New York schools and Harvard College, where he majored in social psychology. Following his graduation in 1950, he joined the staff of the Evening Star newspaper in Washington, D.C., as a copy boy, later becoming a dictationist and part-time reporter.

In 1951, Cornish joined UPI as a staff correspondent and served successively in the news agency’s bureaus in Richmond, Raleigh, London, Paris, and Rome. While in Europe, he reported from Geneva on the 1954 international conferences on Korea and Vietnam; covered a Wimbledon tennis tournament; accompanied former President Harry Truman on a tour through Italy and Austria in 1956; interviewed Somerset Maugham on his 80th birthday; reported on anti-American demonstrations in London, and encountered many public figures ranging from Duncan Hines and King Farouk to Konrad Adenauer and Anthony Eden. His articles appeared in newspapers around the world.

In 1957, he joined the National Geographic Society as a staff writer in the Society's news service. There he wrote articles on computers, xerography, astronomy, oceanography, microbiology, and other topics. The articles were published in the New York Times, Chicago Tribune, and hundreds of other papers.

“My life in 1960 was rather idyllic,” he wrote in 2007. “After spending six years working all hours of day and night as a United Press correspondent in five different cities of America and Europe, I had secured a nice quiet 9-to-5 job with the National Geographic Society in Washington. All I had to do was write feature articles on science, natural history, and geography. For me this was like paradise.”

But as the existential threats of the Cold War came too close to Cornish’s home in the Washington suburbs, he briefly considered moving his young family to Australia, out of harm’s way. His wife, Sally, refused to make that move, however. “My intense anxiety slowly subsided, but the years of growing crisis left me with an obsession: Is there any way to decide what may happen in the future?”

Cornish began sharing his concerns with friends. He gradually came to see the future as an “exciting frontier” that offered opportunities as well as risks and that was susceptible to human intervention. In 1966, he put together a six-page newsletter, The Futurist, containing brief reports on books and activities related to the future, which he sent to people he thought might be interested. There was a favorable response from many distinguished people, including Buckminster Fuller, Alvin and Heidi Toffler, Arthur C. Clarke, and Isaac Asimov. A number also indicated an interest in a proposed association for people interested in forecasts of forthcoming social and technological changes.

On August 3, 1966, Cornish convened a meeting of persons interested in establishing the proposed association. The meeting was held in an office of the National Science Foundation in Washington, D.C. An organizing committee was formed, and a plan was gradually worked out. The World Future Society was officially founded on October 18, 1966. The first regularly scheduled typeset issue of The Futurist appeared in early 1967. The creation of the World Future Society and The Futurist would thus provide both a forum for uniting forward-thinking individuals working separately and a platform for disseminating their ideas.

By 1967, the World Future Society had about 3,000 members, and the task of handling the Society’s affairs and editing The Futurist, which was growing from a newsletter into a magazine, could no longer be done on a part-time basis. So Cornish left his regular employment and worked as a full-time volunteer, supporting himself and his family from savings. By 1970, however, his savings were nearly exhausted and the Society could not afford to pay him on a regular basis.

At that point, a Society member on the White House staff arranged for him to become a consultant for the White House National Goals Research Staff. For several months, Cornish worked full time for the White House, earning enough money to survive financially until the Society could begin to pay him a small regular salary.

While at the White House, Cornish worked principally on the basic natural science portion of the NGRS report Toward Balanced Growth: Quantity with Quality.

The Society expanded rapidly in the following years, adding conferences, a professional journal, and other activities to its services.

In 1975, Cornish served as project director for a directory of future studies under a grant from the National Science Foundation and the Library of Congress. The results were published under the title Resources Directory for America's Third Century.

From 1984 to 1986, Cornish wrote a weekly syndicated column, “Your Changing World,” which appeared in the Los Angeles Times, Dallas Morning News, Chicago Sun-Times, and other papers.

Cornish stepped down as president of the World Future Society in 2004 but continued to edit The Futurist through 2010. After his retirement, Cornish lived in Rockville, Md., with his son and daughter-in-law Jeff and Jill (Martineau) Cornish. He is also survived by son Tony (and daughter-in-law Wendy) and four grandchildren, Marty, Preston, Katie, and Edward. His wife, journalist Sally Woodhull Cornish, died in 1992, and his son, Blake McLeod Cornish, died August 24, 2019.